a bumper crop with famine,
a boom and decline,
all at the same time ...
publicists won't solve this problem

AllAfrica reports that “Ethiopia has registered an 11.6 percent economic growth in the year 2003/4 due to a recovery from the past drought, a report disclosed yesterday.” This article titled 'Ethiopia's instable economy currently growing' sees a recovery from past drought. In the same vein Afrol reports ‘Finally, a bumper harvest in Ethiopia‘ but

the UN report also noted that - despite this strong performance - 2.2 million Ethiopians will need emergency assistance in 2005. In addition, five million people suffering from chronic hunger will receive cash and food transfers under a new safety net programme to start soon.

Agriculture is the main economic activity in Ethiopia, contributing to 45 percent of GDP with some 80 percent of the population earning a living directly or indirectly from agricultural activities. The near total dependence of the agriculture sector on rainfall makes it susceptible to the vagaries of nature and results in high variability of yearly agricultural production..

Field level information now suggests an alarming, rapid, and widespread deterioration of food security in many parts of the country.

Poor rainfall performance in the predominantly pastoral regions of Afar and Somali and eastern crop-dependent areas has been compounded by the delayed implementation of the Productive Safety Net Program (PSNP), the late arrival of emergency food aid, as well as underestimation of needs in some areas.

The situation is worst in areas affected by the severe 1999/2000 and 2002/03 crises, from which only limited recovery has been possible.

The scheme, which had been due to start on 1 January, provides food or cash (US $0.70 cents a day) to people for employment in public work programmes. Working for food or cash, the government says, would end aid dependency.
[...]
Ethiopia's safety net programme was designed to operate alongside its emergency programme. Under the government's strategy, people in need would this year receive aid either through safety nets or by emergency food handouts.

In districts covered by the safety nets programme, however, no one had been getting food or cash whereas in areas covered by the emergency system food has been handed out.

This just does not make sense. Giving people money or food regularly for public work instead of giving them food aid while they work on their own land is supposed to end aid dependency?

Another idea that is being mismanaged is that of resettlement which we looked at in this post "let the ferenjis (foreigners) feed 'em". Northerners are being resettled in the South with totally indadequate support in the midst of national policies based on ethnic divide and rule that have already had tragic consequences.


making sense of it all?

It is hard to square these sets of information with each other - for example famine and reported unprecedented economic growth (based on agricultural growth) seem to be mutually exclusive concepts. As we noted in this post “Zenawinomics and the Aztec Gods” last year’s economic growth was also entirely attributable to the fact that it rained in some places and not in others.

We are delighted that the economy may have grown but the gods of rain are not acceptable determinants of the fate of 70 million Ethiopians and extraordinary figures like 11.6% growth must be examined closely before acceptance.

Normally, population growth, foreign aid and government spending based on foreign subsidies accounts for the lion’s share of economic growth. Given that the national economy is about $7 billion or so, one loan from the World Bank, increased remittances from Ethiopians abroad or even one aid project from the European Union could account for much of the reported 11.6% economic growth.

In this post “Malthus, Hobbes and the Red Queen” we took a look at changes of GNP over several decades and also future projections found in a paper by the economist Berhanu Nega. Overall trends indicate that Ethiopia is becoming progressively poorer, especially in the countryside where most people live. In the cities, particularly Addis Ababa, growth is uneven and eclipsed for the majority by increasing poverty.

EarthTrends is the Environmental Information Portal of the World Resources Institute. There are some links from this country profile page that detail trends over decades of development that are rich with information clearly presented that we will take a look at below. Click on the images for detail or visit the site. 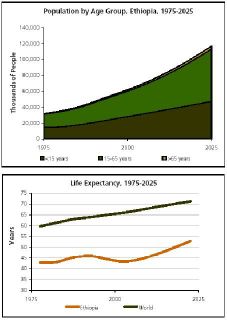 Today child mortality and the total fertility rate are high while the number of births attended by trained personnel and life expectancy at birth are poor - all by the standards of sub-saharan African (SSA).

In addition, by those same standards access to safe water in rural areas where most people live and literacy rates are low. The population is set to reach 113 million over the next two decades. 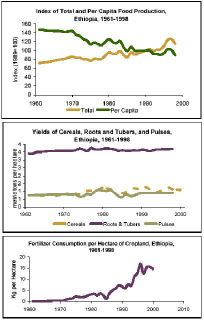 Droughts in Ethiopia typically would be considered poor rain years (but nothing to panic over) in developed countries. Ethiopian farmers, however, employ few water management methods to harvest and save water for dry seasons and drought conditions. Their farming is entirely based on the seasonal rains coming when they are supposed to – even a week’s change in the advent of rain can spoil the harvest for a season (A farmer can plant the seeds one week expecting rain, but the rain may not come for two weeks, killing the seeds and depriving the farmer of any crops). There are few farms which utilize irrigation or water harvesting techniques. Thus, Ethiopian farmers are entirely dependent on an increasingly capricious nature to water their crops.

The number of children underweight and the amount of calories daily consumed per capita are also low by SSA standards. Of course, the dependence on donated food is markedly higher. Foreign direct investment is very low by any standards. 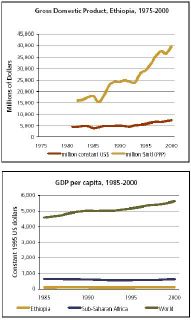 In this post “Malthus, Hobbes and the Red Queen” we took a look at changes of GNP and GDP in detail. This graph shows a stagnant GDP from 1975 in constant dollars with an increasing PPP. Some sources now use a PPP (Purchasing Power Parity) conversion factor which attempts to provide a more meaningful value for wealth across national borders.

The relative costs of the same amounts of goods and services in the domestic market as compared to the United States are calculated to arrive at the conversion factor. Frankly, PPP figures seem to us to be a 'feel good' economic measurements that in the case of Ethiopia go against any rational observation - just take a look at the chart.

In our opinion GDP is the gold standard for measuring national wealth. GDP per capita has been stagnant for Ethiopia and SSA over the entire period of study and in many instances has fallen. 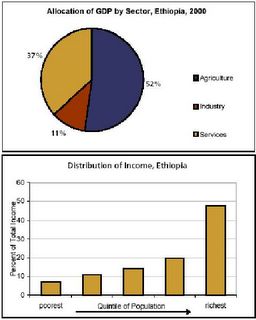 The richest 20% of the population commands almost one-half of the national wealth so the average Ethiopian - a farmer largely disconnected from the international economy except by food aid - is even poorer than a $100 per capita GNP indicates.

Essentially, the fate of Ethiopia is currently measured by agricultural performance more than by any other factor.


so what then is being done?

We started to title this post Crisis but the situation is so precarious that "On Borrowed Time" seems to be more apt. The time for noting a crisis and finding rational solutions is long past for all rational observers. The saying - 'as long as it rains in Kansas, there won't be mass starvation in Ethiopia' is true but along with over hyped statistics and and sunny rhetoric, they are hardly a strategy for long term development.

In Ethiopia today there is no right to own private property and the guiding ideology is ersatz Marxism in the form of 'revolutionary democracy'. That means pretending to have a market economy while strangling enterprise with the economic tentacles of an all powerful, selfish, effectively one party state.

There is no national accountability because pretend elections are held in the setting of mass disenfranchisement and absent human rights. Outside of the sight of Western aid donors that all of the pretense is designed to impress, there are millions of subjects of 21st century feudalism but no citizens.

Indeed the principal consumers of government policy are foreign aid donors who are usually to weary of Ethiopian governance to expect any better. The greatest source of domestic power is the ability to balance a boot on the proverbial national neck while using sleight of hand to get Westerners to believe in something other than what they actually see.

There is no other conclusion to make but that development is a distant priority in Ethiopia today while power must be maintained at all costs. Millions in the present and future generations will have to suffer for the power of a few but that is seen as an acceptable trade-off.