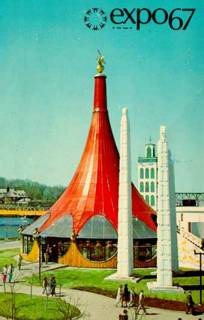 The Ethiopian pavilion from Expo 67 in Montreal. From Jeffrey Stanton Expo 67.

Ethiopia's pavilion was cone-shaped and colorful, purple and red with golden decorations. It was reminiscent of the ceremonial umbrellas of the priests of the ancient Ethiopian city of Axum. At the head of the access staircase, flanked by lions representing the 13 provinces of the empire, visitors looked down on a replica of the Church of St. George at Lalibella. It contained the Crowns of Axum, 1000 silver crosses and other art objects. A replica of the Imperial throne was also on display.

The pavilion's interior roofing was covered with paintings on canvas that told the history and legends of Ethiopia. Below where exhibits of animals and birds native to the country, those that told of Ethiopia's natural resources, and the work of the country's various artists and artisans.

The pavilion also featured a bar and cafeteria where visitors could enjoy famed Ethiopian coffee from Harrar and other specialties.

There is a pic here.