Condors and Eagles from Harlem

When fascist Italy led by Mussolini invaded Ethiopia in 1935 much worldwide sympathy was aroused for the Ethiopian cause but there was little actual support given.

A popular fascination with Africa, and independent Ethiopia in particular, had arisen in Black American and Afro-Carribean communities in the years before the invasion. Beginning as far back as the 1880s there was a spread of "Ethiopianist" churches and for many

Ethiopianism served as an ideology which linked African-American brethren with their African brothers and sisters. During this same period, largely due to the sovereignty of Ethiopia amidst European colonialism on the continent, African Americans fixed greater attention on the ancient Empire of Ethiopia itself, thinking of Ethiopia as a black Zion. In 1896, the defeat of invading Italian forces by Menelik II in the Battle of Adwa served to bolster the mythic status and redemptive symbolism of Ethiopia in the eyes of Africans at home and abroad.

The second Italian invasion of Ethiopia in October of 1935 produced an enormous wave of pro-Ethiopianist sentiments among blacks across the African continent as well as in the Caribbean, Europe, and the United States. Particularly to blacks in the diaspora the invasion was seen as an attack on the dominant symbol of African pride and cultural sovereignty. 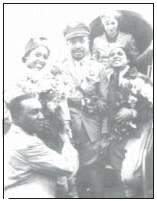 He completed his pilot’s training and earned his wings from Booker T. Washington’s Tuskegee Normal and Industrial Institute in Alabama in 1920, one of the six hundred black pilots to do so. He again attended another mainstream flight school in Chicago where in 1931 and thus became the first African American to break the color barrier and graduate from that institution. His ordeal/odyssey was not over yet. Even after his bona fide graduation local airfields were closed to black pilots to use. So, Robinson got together with some supporters and financed the establishment of another private airport, which was duly certified by the authorities to be used by black pilots. According to his biography written by Thomas E. Simmons, The Brown Condor: The True Adventures of John C. Robinson, immediately after earning his flying license in 1927, Robinson started his own flying school in Chicago for blacks. He even founded an Air Pilots Association for black aviators, and he launched a “John Robinson Airlines.” However, the more he heard of what was happening in Ethiopia and sensed the indignation and frustration of the black community at its inability to do something about it, the more he was impelled to offer his services to fight fascism in Ethiopia.

Melaku Beyan [an Ethiopian in the U.S. who was active in building bridges between Black America and Ethiopia - registration required] heard about him and made contact. Subsequently, Robinson received a cable from the Emperor himself offering him a commission in the Ethiopian army. Prudently, when applying for his U.S. exit visa, he said he was going to Ethiopia on business to sell civilian airplanes. He arrived in Ethiopia at the end of May 1935.

Ethiopia had neither combat trained national pilots nor combat aircraft at the time, out of less than two-dozen mostly dysfunctional aircrafts. With that one aircraft, the intrepid Brown Condor flew incessantly on dangerous missions—not to mention a terrain and airspace he was unfamiliar with—from Addis to Adwa and back. He was carrying supplies, fighters and the Emperor from place to place in the very heat of the war, when the Fascists were controlling the skies and raining down bombs and poison gases. They tried to down him but could not. Robinson gives an eyewitness account of Fascist bombing spree in Adwa where he witnessed the very first assaults of the Fascist elements across the Mereb river on 3 October 1935. Professor William Scott in his book, The Sons of Sheba’s Race, paraphrases the Brown Condor’s description of that first day of bombing and the tragic reaction of innocent civilians in Tigrai:

"When Italian planes attacked the Ethiopian towns of Adwa and Adigrat at the start of Rome’s African campaign, Robinson was caught along with Ethiopian civilians and military in the wanton and bloody bombardment. He had been sent on a courier mission to Adwa, scene of Italy’s humiliating defeat in 1896, the day before the surprise attack. Staying there overnight, Robinson was awakened at dawn by the terrible noise of explosions. Four large bombing planes arrived…and began bombing. Many people ran for cover in the city’s outskirts. Others sought refuge at the Red Cross hospital, imagining they would be protected there, but it too was shelled and was the scene of the heaviest casualties. Infuriated Ethiopian soldiers, anxious to engage the enemy in battle, ran out into the streets, waving their swords and challenging their adversaries to descend from the clouds and fight like men in hand-to-hand combat."

Although the Fascists failed to down his plane, the Brown Condor was shot at and wounded on his left hand, but he still managed to land safely ... On the eve of Fascist entry into Addis Ababa on 5 May 1936, Robinson had to return back to the United States ... Later, after the war had ended, Colonel Robinson was returned to Ethiopia in 1944 as head of a team of African American aviators and technicians to help build a modern Ethiopian Air Force.

In his book "Ethiopia and the United States Volume 1; the Season of Courtship" (no link available) Negussay Ayele describes Robinson's 1944 return along with his team, the self styled "Brood" (including one Puerto-Rican electrician and radio technician). They set up shop in the Orma garage in Addis Ababa and proceeded to train eighty cadets over two years that formed the nuclei of the colonels in the air force.

Robinson had some difficulties with the Swedish pilot, Count Von Rosen, who had also served in Ethiopia. Significantly, Ethiopia's post war air force was largely a Swedish financed and supplied affair - a threatened break of that relationship simply could not be afforded. Robinson resigned from the service to set up Sultan Airlines and an import firm with one of the Emperor Haile Selassie's sons. In addition Robinson and another son of Africa who took up life in Ethiopia, Dr. Talbot, created the educational American Institute. Throughout, Robinson remained a consultant to the Ethiopian Ministry of War.

On March 13, 1954 Robinson volunteered for an emergency flight to deliver blood and crashed. Barely surviving the accident, he died two weeks later in hospital and was mourned by thousands on two continents.

In a National Day Message by Ambassador Aurelia E. Brazeal on February 20, 2003 had this to say about African-American and Ethiopian relations.

During the nineteenth century and well into the twentieth, Ethiopia, the uncolonized nation, became a symbol of freedom to the African-American, and often black churches and civic organizations included the word Ethiopian or Abyssinian in the formal names of their organizations to affirm the dignity and self-determination of a free people.

The twentieth century saw many African-Americans come to Ethiopia to work in a spirit of solidarity, especially during the struggle against the Italians. These include people like Colonel John Robinson, an American pilot, who helped Ethiopia defeat the Fascist occupation, and later became an important figure in Ethiopian aviation.

Recognizing the appeal Ethiopia had as an ideal to the African-American community, Ato Yilma Deressa, Ethiopia's Vice-Minister of Finance in 1943, visited Washington, which was then a racially-segregated city, and successfully recruited African-American teachers, technicians and other professionals to come to Ethiopia and assist in its post-war reconstruction.

Among these Americans were William Steen, one of the first editors of the Ethiopian Herald; Edgar Love, headmaster of the Ras Mekonnen School, and several aircraft technicians, who worked alongside Colonel Robinson in the development of civil aviation. 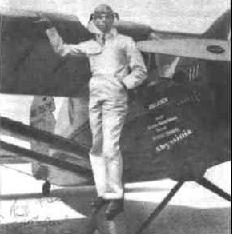 Colonel Hubert Fauntleroy Julian with his Packard Bellanca, "The Abyssinia" in 1931. Julian was at the time the holder of the World's Non-Refueling Endurance Record for a flight lasting 84 HRS. and 33 MINS.

Colonel Hubert Fauntleroy Julian, the Black Eagle of Harlem is another little known figure in Ethiopian and American history. He was

the first black person to obtain a pilot's license. Tall, athletic and handsome, he was dubbed "the Lindbergh of his race." Despite constant struggles to raise financial backing for his exploits, he had a brilliant and widely publicized flying career.

The African American Registry has more detail about Julian

From Trinidad, he came from a well-to-do family who sent him to England for school. The dangers during WW I caused the family to move him to Montreal.

By 1921 and having moved to New York, he had become a “gentleman flyer,” a man about town, sharp dresser, etc. He was a supporter of Marcus Garvey and in 1922 flew his plane over parades in support of Garvey.

In July, 1924, Julian intended to fly to Africa and become the first person to fly solo across the Atlanic Ocean. He dubbed his airplane Ethiopia I and began to raise money for the trip. This attempt failed with a crash into the water off of Flushing New York, and Julian spent the next month in the hospital recovering from injuries. His 1929 Trans-Atlanic flight (was) 2 years after that of Charles Lindbergh.

Julian flew to Ethiopia in 1930, where his flying exploits impressed Emperor Haile Selassie, who awarded Julian Abyssinian citizenship and the rank of Colonel. In 1931 he was the first African-American to fly coast to coast in the United States. Julian was one of several aviators in the 1920s and 1930s who competed in outdoing each other and breifly holding records for longest non-stop flights. In 1931, for example, Julian held the non-stop non-refueling aviation endurance record with a flight of 84 hours and 33 minutes. Julian flew a number of flights in and between the Americas, Europe, and Africa, surviving several crashes. In between major flights he headed and toured with a small all-Black flying circus called The Five Blackbirds.

During the Italian invasion of Ethiopia in 1935, Julian flew to Ethiopia to aid in the defense of Selassie's government. He commanded their Ethiopian airforce, which at the time consisted of 3 planes. Yet after getting into a public fist-fight with Black aviator John C. Robinson, he was ordered to leave the country. Beyond aviation, Julian also invented some safety devices used in airplanes ... After the United States entered World War II, Julian volunteered to train for combat with the Tuskegee Airmen. He was a colorful character who wore a non-regulation Colonel's uniform, despite not holding rank with the United States Armed Forces, and was discharged before graduation.

The 14 November 1974 issue of Jet Magazine briefly mentions Julian, saying he was then 77 years of age, and was making plans to rescue Haile Selassie [during the Dergue coup of that year], then believed to be held prisoner by the new government of Ethiopia.

Hubert Fauntleroy Julian died in the borough of the Bronx, New York City, in February 1983. His passing went largely unnoticed.

There is a history of the distinguished Tuskegee Airman here.

Air Vectors has an informative brief on their adventures.