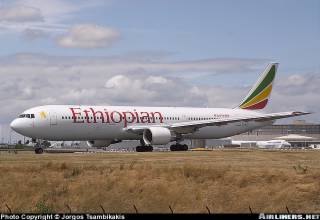 The answer remains that unlike too many aspects of economic policy and social policy and national life the airline was basically ... left alone.

The Economist answered the question fully in this article about business in the developing world printed way back on December 26, 1987 (no link available). Most of the article and its accompanying commentary is below.

The author begins with a look at the business acumen of restauranteurs and mechanics who form part of the large Ethiopian community in Wahington D.C.

But Washington's (new) entrepreneurs can still shock the unwary. Who would have thought that the city's well-heeled middle classes would flock to upmarket restaurants serving food from a country whose principal recent claim to fame was famine? Or that the names of car mechanics from this blighted country would be passed around the cocktail circuit like cherished recipes?

Dig deeper, and the paradoxes start to sort themselves out. Some of those mechanics were initially instructed by a profitable, growing company renowned for its training programmes, and which services expensive capital equipment for firms from more than 20 countries. An American multinational? No. The firm that trained them is a government-owned outfit in a Marxist-mismanaged country with (according to the World Bank) the lowest GDP per head in the world.

There has been some change in this regard, the new government combines Marxism with crony-capitalism but has left the more than able staff of Ethiopian Airlines to their own devices as much as possible.

First, the airline has good relations with its government. Though its board is spotted with Comrade This and Comrade That, gossip has it that Captain Mohammed accepted the position of general manager only after being assured that he could run the airline as a commercial operation. Second, it has kept up foreign contacts, and has used them wisely as a method of expanding. Third, it has taken a realistic view of its market -- and has appreciated that regional markets in the developing world are a better proposition than either a small and poor domestic market, or an attempt to make it in the developed world, where it can be beaten-up by big, rich carriers.

Ethiopian Airlines -- the company in question -- is an unqualified success. Whatever shape the Ethiopian economy as a whole may be in, the American government's Ex-Im Bank has happily guaranteed loans to the flag-carrier. In October 1987 the airline took delivery of its third Boeing 767 wide-bodied airliner, part of an upgrade of its entire fleet costing more than $ 140m. That fleet carried 555,000 passengers in 1986-87, up from 510,000 the previous year. In the past five years, the number of passengers carried on Ethiopian Airlines has grown by an average of almost 11% a year. The airline has made a net profit -- after interest charges -- in all but one of the past ten years, earning $ 8.5m in 1986 (from an operating profit of $ 22m) on revenues of $ 185m.

Set up in 1946 for Emperor Haile Selassie by America's TWA, the company had American general managers until 1971. The American connection was one of the reasons that the airline's engineering facility at Addis Ababa gained such a reputation. It services aeroplanes for many carriers in Africa and the Middle East, while training both pilots and airline managers. But is would be patronising and wrong to assume that the success of the company is due only to its roots in the developed world. It has been successful, above all, because it sells a product unique in its market.

Most African airlines try to make sure that their aircraft land regularly in European capitals, so their route maps consist of a series of lines running north-south. And, because they cannot compete on cost, service on reliability with European carriers, they lose money.

Ethiopian Airlines is quite different. Its route map is modelled consciously on the hub-and-spoke system that now dominates American flying; it is the only airline with a daily flight east-west across Africa (it serves three routes across the continent). Without these routes, businessmen travelling from Dakar to Nairobi, say, would be tempted to fly via Paris. Instead, the airline's general manager, Captain Mohammed Ahmed, offers them a chance (with both first and business classes) to connect through Addis Ababa into a proper regional network. He says he is not interested in the seemingly prestigious, but low-yield business of carrying tourists from Europe to Africa's game parks and beaches. Because his airline earns valuable foreign currency for his country, he seems to have a guarantee from Ethiopia's Marxist regime to leave well alone. His annual report highlights productivity.

The success of Ethiopian Airlines in a disastrous economy is one example of an encouraging truth. In places which the casual pundit in New York, London or Tokyo might assume to be economically hopeless, there are companies as excellent as any celebrated in the case-studies of the rich world's business schools. These companies make money the hard way. Until recently, firms in much of the developed world (and American firms particularly) could make a nice living without ever worrying about foreign exchange, and without their executives knowing anything other than their native language. And their success or failure, as a general rule, would be scarcely influenced by politics.

Businessmen in the developing world have had none of these advantages. They have had to wrestle with shortages of hard currency, learn to speak in global languages, and been forced to be politically adroit. Those that have succeeded deserve to be better known -- and not simply because excellence deserves praise.

From the 1950s to the 1970s, admiration of the economic growth experienced by Russia from 1920 suggested to the governments of many developing countries that central economic planning and a large public sector were indispensable to brisk development. That view now sounds extraordinarily dated.

Except in ruling circles that govern the rest of the Ethiopian economy ...

As Mr Babacar N'Diaye, the president of the African Development Bank, said in 1986, "It is now generally accepted that over time most public-sector enterprises have not performed efficiently. From this reappraisal has emerged the need for enhancement of the role of the private sector". He might have added -- as Ethiopian Airlines convincingly shows -- that there has been no less a reappraisal of public enterprise itself. Increasingly, what matters for those firms remaining in the public sector is that they deliver value for money.

Imagine what transformations could be wrought in Ethiopia as a whole if the same rules under which the airline operates were allowed to be applied in a dozen, a hundred even thousands of PRIVATE enterprises fueled with the legality of basic property rights.

It is not rocket science to realize what works and what doesn't in commercial enterprises and national economies - some make money and grow rich while others are bankrupted and remain poor.

The staff of the airlines is not composed of mutants or of magicians. They are just folks who have been given a shot at basic market capitalism that their fellows have been denied. All Ethiopians could do far better if the government just got out of everyone's way.

Unfortunately the rulers see the issue as one of national sacrifice in the service of their own security at the top.