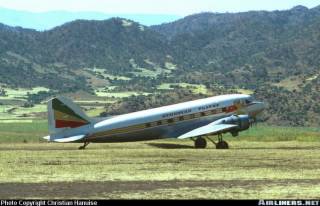 Ethiopian Airlines, now approaching its 60th year of operations, has been a glaring constant of success despite government ownership and a succession of Imperial, Marxist, and quasi-Marxist governments. This story about its expansion caught our attention.

The Boeing Company has only revealed the identities of four of the 24 airlines it said last month have placed either firm or tentative orders for its new 7E7 Dreamliner.

While company officials won't say whether Ethiopian Airlines is one of the 20 mystery customers, it's clear that Boeing would sure like to add the carrier to its list of 7E7 buyers.

But despite the longstanding relationship between the two companies, it's not a given that Ethiopian Airlines will always operate an all-Boeing fleet.

Airbus and Boeing have fought hard over similiar deals, with Airbus proposing its A319-100 and A330-200 airplanes. Airbus has recently overtaken Boeing in market share and orders as The Economist reports in this piece from the Farnborough airshow.

A decade ago, Airbus supplied just a fifth of the civil-aviation market. But since then, a raft of new, subsidised aircraft has greatly boosted its share of the market: last year, for the first time, it delivered more planes than Boeing. And, judging by the news coming out of Farnborough this week, the gap is likely to widen. Helping to power Airbus’s growth is its A380, a double-decker “super jumbo” which can carry 555 passengers halfway round the world and which will be delivered from 2006. Airbus has bet—probably correctly—that this will become the aircraft of choice when airlines come to replace their ageing Boeing 747s.

Boeing’s own attempt at a replacement for its jumbo—the smaller, speedier Sonic Cruiser—had to be abandoned after the company failed to secure enough orders. Boeing is now betting that the airline industry will develop in a different way. Its main new offering is the 7E7—the E is for “efficiency”—which holds around 250 passengers and is set to replace the 757 and 767. The new aircraft can cover more than 9,000 miles but its smaller size also makes it ideal for shorter hops. It has a list price of $120m, roughly the same as the models it is replacing, but Boeing claims it is worth 20% more thanks to its operating efficiencies, as it is made from lighter carbon-fibre materials. For passengers, Boeing promises bigger windows, wider seats and higher humidity to make for a more comfortable flight.

These are the only two major sources for world class airliners. Battles for market share can often be bitter and involve the use of European Union and American foreign policy influence and aid programs. The EU often expects (strongarms?) aid recipients into doing business with European companies. Ethiopia is a major recipient of EU aid and Europe is the most valuable market for Ethiopia's few cash exports. The other major source of budget support, aid for development programs and emergency food aid is the American aid programs.

Tupolev of Russia also manufactures airliners. Technical standards, particularly with respect to safety, are approaching Western norms but the baggage of the Soviet past restricts competitiveness on the international scene. Embraer of Brazil makes smaller, but worldclass, airliners often for the commuter market. Bombardier of Canada, which also owns Learjet, also commands a healthy portion of the world market for regional jets.

Boeing likely won the Ethiopian contract because its size limited the amount of pressure that the EU was willing to exert on one of the world's poorest nations. In the context of the post 9/11 world and given the 'difficult neighborhood' Ethiopia is located in, high value must also be placed on the current security relationship with the US. Furthermore, familiarity with Boeing made planes makes for technological comfort and a reduction of operating costs from the customer's point of view. Overall, it seems like a good business decision.

Thus, the Boeing-Ethiopian relationship seems quite solid. In 2002 a deal was signed for the lease of twelve aircraft over four years - six Next Generation Boeing 737-700s and six 767-300ERs (Extended Range). There are also options for delivery of five 737-700s and three widebody 777s.

In 2002, the airline carried 1,054,687 passengers to destinations from Asia to North America with extensive service to internal and African locations. Ethiopian describes its own strategy...

Sustained growth has fueled the development of the most comprehensive pan-African route network of any airline. We know Africa by heart, and as a means of introducing visitors to the wonders of Africa, Ethiopian Airlines is unrivalled. Our increasing number of international destinations also provides a smart way for Africa to reach the world.

Long standing relationships appear to be highly valued at Ethiopian Airlines. In 2003 Pratt & Whitney received engine orders for new aircraft to be flown by Ethiopian

(P&W) has been supplying engines to Ethiopian since the airline began international service in April 1946 with DC-3s flying between Addis Ababa and Cairo.
"We are delighted to expand our 57-year relationship with Ethiopian Airlines," said Robert F. Leduc, president of Pratt & Whitney's Commercial Engine business. "We're grateful for the opportunity to continue supporting the growth of one of Africa's largest and most highly respected airlines.
"The outstanding capabilities and reliability of these engines will support Ethiopian Airlines' strategic plan by further strengthening the airline's competitiveness."

Plans were also confirmed at the time of the Boeing order for the construction of a major air cargo terminal at Addis Ababa airport. A new $130 million and airport improvement program financed in part by OPEC , the Kuwaiti government and the African Development Bank has recently been completed. The new passenger terminal is a welcome change from the neglected and decaying original built in the early 1960s - its contractors included companies from the UK, Lebanon, South Korea, Japan, Germany and Kuwait.

Ethiopian Airlines is also a beacon of native technical and administrative competence for third world airlines. It is operated at every level by Ethiopians - training was also provided from the outset to students from other African and at times Asian countries. It

plays a key role in the sub-Saharan African region, where it has established a maintenance center capable of performing all heavy checks. The center has been certified by the U.S. Federal Aviation Administration.

Development of aviation resources was begun by necessity early in the 20th century. The country is mountainous, now landlocked and with an inadequate road or rail network. In the distant past passenger compartments were often shared with trussed up sheep, bundles of skins or coffee for export. Standards of comfort are, of course, quite high now and the airline remains a vital part of the national economy.

The origins of the airline date back to the end of the Second World War and reflect the geopolitics of that era. From the Reporter

The Americans left their stamp on the Air Force as well as on civil aviation. In 1945, the Ethiopian delegation attending the founding conference of the United Nations approached the Americans for assistance in setting up a civilian airline.

During the same year, the Ethiopian Airlines was established with a capital of 2.5 million birr and five DC-3 aircraft taken from the United States World War II surplus pool under a management contract with Trans World Airlines (TWA).

The agreement lasted three decades, with TWA providing the managerial and supervisory personnel for most of that period. The Ethiopian Airlines first establishment was marked by flying six DC-3 aircraft to three neighboring countries’ capital cities (Aden, Cairo, and Djibouti) and our domestic towns (Addis Ababa, Asmara, Gondar and Dire Dawa).

Why is Ethiopian airlines such a notable bright spot on the Ethiopian scene? Unlike too many aspects of economic and social policy and life the airline was basically ... left alone.

More on this in a post later this week.