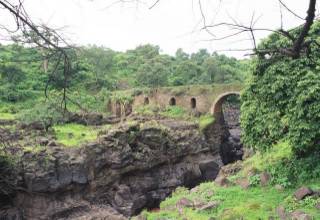 The First Portuguese Bridge, built in 1620, en route to the (Blue Nile) falls.

A December 2000 National Geographic article about the struggles of Ethiopian villagers to cross the Nile river moved Ken Frantz to found Bridges to Prosperity. The article described how a

single rope is the only link between the east and west banks of the Abay (Nile) at the Second Portuguese Bridge, whose central arch collapsed when Ethiopian patriots undermined its footings during the Italian occupation of 1935-1941. Just four other bridges span the river, which for centuries served as a defense for Gojjam, the region it encircles.

... Frantz, the owner of a construction company, knew he could use his expertise to help the 375,000 villagers who live on either side of the Portuguese Bridge.

The bridge spans a 4,000-foot gorge, 26 miles from the nearest road or town. Some 25,000 pounds of steel, cement, and equipment necessary for the repair work had to be transported to the site on the backs of 350 donkeys.

Over two weeks in February 2002, the volunteers, assisted by more than 250 local residents, repaired the Portuguese Bridge. All of the work was done by hand, and a rock hammer was the largest tool used. When the bridge was completed, more than 1,000 residents and government officials attended a reopening celebration.

(t)he program aims to construct 50 pedestrian/donkey bridges across the Blue Nile per year.

Long before (Frantz) set his foot at the locality of the Broken Bridge, what (he) thought about was the economic part of the whole exercise which would eventually benefit the people in the area. With the bridge now fixed, people from Gojam and Gonder could trade goods and services like never before. “We estimate that this bridge would increase trade between the two provinces by 20-25 million Birr per year,” Ken says with some air of self-assurance.

With the outcome yet to be seen, Ken looks forward to another project along the Abay river. This time, it is the “Costanios Bridge, (named after the architect who began working on it nearly a hundred years ago) assumed to be the first automobile bridge that Emperor Menelik ordered to be built but was left unfinished. “That bridge would be connecting several provinces,”

The Second Portuguese Bridge Project cost $108,000, all in donations.

Current Ethiopian budget priorities include items such as a squadron of ten advanced Su-27 fighter aircraft obtained from Russia at a cost of about "$35 million per aircraft, or $70 million on a ten-year supported lease".