'Zenawinomics' and the Aztec gods

Prime Minister Meles Zenawi’s 2003/4 performance report to the House of Peoples’ Representatives was presented on the 9th of July 2004. Here is the money quote

Proceeding from the efforts of the peasant and the pastoralist and by encouraging the private sector, satisfactory results have been achieved from the development activities in 1996 (Ethiopic Calendar). Figures as confirmed by the latest information, our economy has registered a growth rate of 11.6% over the current year. The contribution of agriculture to this growth has been the highest with 18.9%, industry 6.9%, distribution 7.6%, other services 6.3%. Export figures for the past 11 months indicate a possible export growth of 13%. Over the following year we shall strive to achieve a comparable growth by carrying out activities described earlier in this report. We shall make a special effort towards a growth rate of 10-13% for the economy as a whole and an export growth of over 30%.

This progress is far greater than satisfactory! It would justify optimism worthy of the early Asian Tiger economies. The formula of Zenawinomics described as

seems to be working! Well ... let's take a look at this July 12 article from IRIN discussing the economic aspects of the report "Unprecedented economic and agricultural growth reported for 2003/2004" It adds some crucial information

Agriculture is vital to Ethiopia’s achieving its annual $6.7 billion gross domestic product, and more than 80 percent of its 70 million people work in that sector.

The figures Meles gave are particularly significant since a severe drought brought about a 25-percent drop in harvests in 2002/2003, while the economy experienced negative growth. The country's extreme dependence on rain-fed agriculture results in fluctuating and volatile growth rates, which, some analysts argue, exacerbate deep-rooted poverty.

Apparently there is some serious spin going on ...

Therefore, overall the agricultural sector is doing worse then than it was in the 2001/2002 period. Because of the inherent dependence on rain fed agriculture it seems that was is being reported is simply a good year for rainfall.


During the current year, with the exception of northern half of the country, above normal rainfall has reportedly continued in almost all crop dependent areas through November. As a result, most cereal crops should produce normal yields.

Isn't that good rainfall in the south at the very core of the positive spin in the report to Parliament?

How about the overall growth rates? Why don't we take another look at the IRIN story

The economy in all of its aspects is so dependent on rainfall that it is described in its entirety as volatile. Sadly, the rains may not come this year because they have not come so many years in the past.

Zenawinomics could just as well depend on state mandated prayers to Tlaloc, the Aztec god of rain 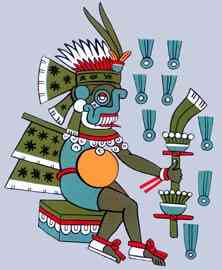 Tlaloc would certainly do as much good and probably less harm than the government's current land and agricultural policies. The tragic lack of rational planning and policy is an ongoing theme for ethiopundit.