A few transport aircraft were also acquired during 1934-35 for ambulance work. The Air Force was commanded by a French pilot, Andre Maillet, who delivered the first Potez. He was succeeded by another Frenchman, Paul Corriger, who remained until the Italian conquest of Ethiopia in 1935, when the Imperial Ethiopian Air Force ceased to exist.

A new Imperial Air Force was created with American and British assistance in 1946, after the liberation of Ethiopia from Italian occupation.

This image is from Insignia Magazine. The plane pictured is a Potez 25 A2 Serial no. 3; the Nesre Makonnen (Prince Makonnen), Addis Ababa, 1933. Here is more on the Potez 25 a

light attack, army co-operation and tactical reconnaissance warplane. (Armament) included ... one forward-firing machine gun in the forward fuselage with synchronization equipment to fire through the propeller disc, and two rearward-firing machine guns in the rear cockpit ... (it could carry) four 50 kg (110 lb) bombs.

Several Ethiopian and foreign accounts of the 1930s note the Potez primarily for how slow it was relative to other aircraft worldwide and in the Ethiopian inventory. Clearly, any biplane on the eve of the Second World War was obsolete and the Potez had already been in Ethiopian service since 1924.

In his book "Ethiopia at Bay: A Personal Account of the Haile Sellassie Years" (no link available) John H. Spencer, a long time American advisor to the former Emperor describes a flight to the 1936 warzone at Dessie

I flew there on January 16 along with the British Military Attache, Major Holt, in a cabin single engine Potez, (with canvas fuselage and wooden frame) piloted by Michka Babichef, another kilis [person of mixed race], the son of a White Russian father and Ethiopian mother. Although the distance was only slightly more than 160 miles, the flight took an hour and a half.

The Ethiopian Army field headquarters was there and Spencer goes on to describe a bombing raid by the Italians during which the Emperor mans an anti-aircraft gun. 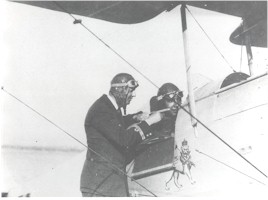 Michka Babichef in the cockpit from MediaEthiopia. The second licensed Ethiopian pilot was Asfaw Ali.

According to People of the Plow: An Agricultural History of Ethiopia, 1800-1990 by James McCann, Babichef senior was a White Russian (a term used to distinguish non-Bolshevik or pre-Communist era Russians) confidant of the former Emperor Menelik who was given the military / noble title of Qagnazmach.

Near the present day city of Bishoftu, (which was to become the HQ for the Ethiopian Air Force in later years) he established an early example of commerical agricultural enterprises on lands he had irrigated and later distributed to his workers.